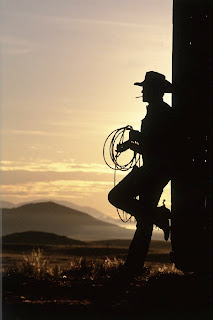 Hannes Schmid: Cowboys at Edwynn Houk Gallery through October 29
﻿
﻿Swiss-photographer Hannes Schmid (b. 1946) is a media-mediated mythmaker. The creative eye behind those hunky Marlboro Men who ride, rope and sell cigarettes.  Back in the day .. .  Schmid’s concept of hardcore masculinity entered our consciousness through the tiny television screen at home or loomed large on highway billboards.  The Marlboro theme song (can you still hum it?) transported us to a glamorized West.  These rugged wranglers silhouetted against the open sky joined with other faux cowboys -  Bonanza’s Cartwright family, Roy Rogers and Bat Masterson – to wrest right from wrong.  They were our flannel and jeans supermen (albeit invented by urban Mad Men trapped in gray cubicles between lunchbreaks and commuter rides to the suburbs).

Consumerism and iconic packaging had already been explained to us by Andy Warhol in the 1960s.  Then the artful dodger Richard Prince, a savvy, self-promoting Appropriationist, got into the act with his recontextualized Schmid photographs in the 1980s and 1990s.

Without the ubiquitous Marlboro Man commercials and billboards, Prince’s work seems to have fallen flat these days.  Meanwhile, the emergence of Hannes Schmid as a name-brand may very well be on the ascendant with his own solo show at Edwynn Houk Gallery, contributions “Who Shot Rock: Photographers of Rock and Roll” at the Brooklyn Museum last year (currently at Tucson Museum of Art through January 15), and his photos of the Maha Kelumbh Mela pilgrimage to the Ganges River in his “Human Currents” at the Rubin Museum’s show (through November 13).

NB: Prince’s prices exceed Schmid’s today – but I am sure that won’t last for long.

Check out more on the blog DLK Collection 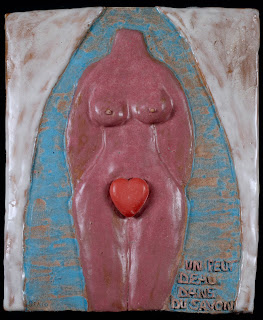 Would that we could all live like Beatrice Wood, the poor little rich girl from and later , who ran away to for two years (1912-14) and acquired enough French to translate for the composer Edgar Varèse during his hospital stay for a broke leg, and there upon met Marcel Duchamp at Varèse’s bedside.

From that fateful introduction came her friendship with art collectors Louise and Walther Arensberg, soirées with the Dada-ists, and a ménage-à-trois with Duchamp and writer Henri-Pierre Roché which inspired for his book Jules et Jim, 1953  (and another ménage-à-trois with his wife Helen Grund and German writer/translator Franz Hessel).

For Wood, these adventures among artists occurred early on - her Act One.  Act Two began at the age of 40 when she took up ceramics.  Beatrice Wood lived until 105 and created an enormous body of work that remains fascinating and, at times, hilarious. 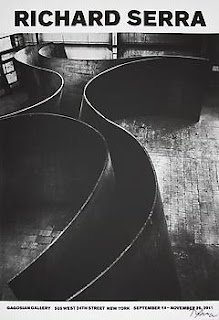 Richard Serra at Gagosian Gallery on West 24th through October 29

Just see it - before it closes tomorrow: excellent!
﻿
Posted by Beth S. Gersh-Nesic at 10:12 AM