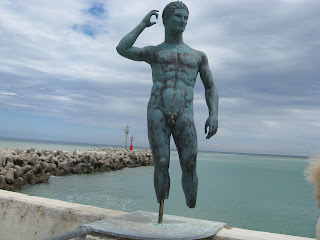 
One year ago Shelley Esaak posted the question "Where in the World is Beth Gersh-Nesic?" on her About.com: Art History website.   Where was I indeed?   In Fano, Italy, on a press junket that met with President Gian Mario Spacca, right in front of a copy of Atlete di Fano (Victorious Youth),* pictured above.  Here is the story:

One Hot Body – The Getty’s Victorious Youth (aka Atleta di Fano)
In 1977, the bought Victorious Youth for $3.95 million. Now wants it back. An assortment of international journalists were invited to the Four Seasons Hotel in Milan on June 7, 2011 to listen to President Gian Mario Spacca, the governor of the Marche Region, plead his case for the return of the statue to Fano, located on the coast of the Adriatic Sea, in the heart of the Marche.  On May 3, 2012  the courts ordered the return of this ancient sculpture - pronto. http://chasingaphrodite.com/2012/05/04/the-gettys-bronze-italian-court-upholds-order-to-seize-a-getty-masterpiece/ 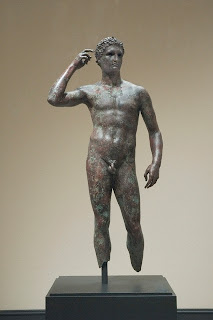 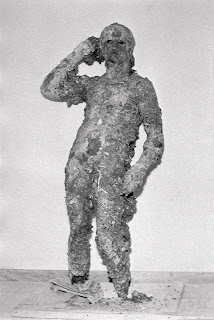 In 1964, on a typical summer day of commercial fishing halfway between the coast of Fano, the ancient Roman city Fanum Fortunae (Temple of Fortune) in Italy, and the Croatian coast of the former Yugoslavia, the Ferrucio Ferri, a 60-foot Italian trawler, inexplicably hauled abroad a heavy human form in its fishing net. At first, the six-men crew thought they brought up a dead body. Then they scraped away some of the barnacles and realized this fishy figure was made of bronze.  Rather than report the mysterious treasure to the local authorities, Captain Romeo Pirani decided to keep this unexpected “catch” hush-hush and share with his crew the cash made from a secret sale of the object. To complete their plan, they waited until the wee hours of the next morning to sail back to port. Then, undercover of darkness, they spirited away a statue so densely covered with the crustaceans, they believed it had to be a very old work of art.

The captain took charge of the smelly bronze figure and stored it in his cousin’s garden. However, the stench from rotting fish became too powerful to bear. A few days later the statue was buried on a farm outside Fano, in a cabbage field. One month later, Giacomo Barbetti, a wealthy antiquarian from Gubbio (50 miles from Fano), looked at the bronze and identified it as a Lysippis. He offered the captain 3.5 million lira (about $4000 at the time).  Captain Pirani took about $1,200 (twice his monthly salary) as his cut for the sale.
Now Barbetti knowingly entered into an art crime by not reporting his possession of a cultural object found off the coast of . (According to an Italian law set down in 1939, a work of art found on Italian territory must remain in Italy.)  Nevertheless, this son of a concrete magnate kept the statue under wraps (literally) in red velvet, thanks to the help of Father Giovanni Nagni and his conveniently located sacristy, where the bronze was hidden. But the bronze, still encrusted with crustaceans, stank! So Father Nagni took it upon himself to drag the bronze to his home for a long salt-water soak in his bathtub. Meanwhile a passing parade of “guests” secretly visited the statue in Father Nagni’s house in Gubbio. One such “visitor,” a restorer, tipped off the local police, who staged a raid a few days later. By then Barbetti had caught wind of the informant’s deed and presto! the bronze magically disappeared.  How and in what form remains unknown.  One theory is that Barbetti submerged the statue in cement and shipped it off to a monastery in . In 1966, the police convicted Barbetti and Father Nagni of criminal activity, placed them in jail and then two years let them go, citing insufficient evidence to substantiate the charge.
By 1971, the bronze athlete had resurfaced in and was sold to Artemis, an art consortium based in , for $700,000. Heinz Herzer, a German antiquarian, collected the statue and brought it to his studio for a thorough cleaning. Finally, the full beauty of the bronze figure was revealed, including the reddish rusting from the prolonged barnacle attachments. The bronze was treated to a chemical bath to arrest the further damage and then tested with Carbon-14 for dating. The results confirmed that work was executed sometime between 300-100 BC.  (Still vulnerable to rusting, the statue must be protected from high humility.)

The plot thickens . . . .
Enter Bernard Ashmole, the curator of Greek and Roman art at the , who received photographs of the Hellenistic bronze from Herzer.  Ashmole motored out to , J. Paul Getty’s estate outside of , to talk to the richest man on earth about this exceptional find. Getty’s appetite for a bargain art deal was piqued, but he decided to pass because the work lacked the proper documentation. He could smell the stink of ill-gotten goods which no chemical bath could ever wash away.

Meanwhile, Dietrich von Bothmer, curator of antiquities at the Metropolitan Museum of Art, whose expertise was Greek vases, heard about the statue and informed his boss, Thomas Hoving, the director of the museum at this time. Hoving, who craved big-game art trophies, first licked his chops and then skittered out of the way – reluctant to enter into another questionable acquisition on behalf of the Met.  It was 1972 and Hoving had just purchased the infamous Euphronios vase for an unprecedented $1 million. The press was already breathing down his neck looking for dirt.

Four years later, on June 6, 1976, J. Paul Getty died, leaving $700 million to the . Giddy with such largess and free of Getty’s stingy micromanaging scrutiny, the head curator, Burton Fredericksen immediately set his sites on the alleged Lysippis bronze that was still on the market. Fredericksen dreamed of transforming this underrated West Coast collection into top-drawer institution. An important late Hellenic bronze could make any lesser-known museum a star.

By November 1977, the newly-christened Getty Bronze entered the Getty collection, followed by a whole bunch of second-rate antiquities that curator Jiri Frel procured through “donations.” The story about Frel’s self-serving scheme of inflated appraisals that could be used for hefty tax deductions fills several pages in Jason Felch and Ralph Frammolino’s sizzler Chasing Aphrodite: The Hunt for Looted Antiquities at the World’s Richest Museum, published in May 2011. The Victorious Youth makes a cameo appearance in the first chapter and again towards the end of this thriller when the Getty has to negotiate the return of numerous fenced objects. (My review  for Venice Magazine, July - August 2011, will be the next post.)

Twenty years . . . .
In 1997, Giacomo Medici, a well-known antiquities middleman associated with prominent collectors, was arrested by the Italian government for amassing an enormous amount of looted art in a warehouse.  Like Neal Caffrey, the suave and sophisticated art theft in the television series White Collar, Medici cut an elegant cosmopolitan figure. In 2004 he was found guilty by a Roman court and sentenced to a prison term of 10 years, which he is still serving.  He was also fined 10 million euros.

In May 2005, Marion True, curator of antiquities at the , found herself in a Roman courtroom answering to charges of receiving stolen goods and conspiring to export unlawful antiquities.  She stood trial with Robert E. Hecht, a shady supplier for the antiquities dealer Bruce McNall, who ran Summa Gallery on – the source for many Getty donors’ gifts (arranged by Jiri Frel).  The race for restitution was on – a highly competitive and diplomatically delicate sport.

By early 2006, Philippe de Montebello, then director of the Metropolitan Museum of Art, visited to negotiate a repatriation deal with the Italian authorities. The mutually-agreed on forfeiture sent 20 of the Met’s questionable acquisitions back to , including Hoving’s celebrated “hotpot,” the Euphronios vase.  During this same period, the Getty’s newly-appointed director Michael Brand, followed suit but hit a snag.  Brand offered to return 26 items, plus the Morgantina sculpture of a goddess known as “Aphrodite.”  However, the Italian negotiators didn’t bite. They wanted the Victorious Youth, pronto.  Brand refused and walked away from the table to regroup, rethink and re-strategized the Getty position. By April 2007, an agreement was struck that required the return of 46 items from the Getty, plus the Morgantina “Aphrodite” -  but no Getty Bronze.

On February 13, 2010, the Italian courts ruled that the Victorious Youth must be repatriated to its shores. The Getty appealed the judgment. On May 3, 2012 the Italian court ruled once again that the statue must be returned to Italy, specifically Le Marche, probably Fano - although that part is not clear.

By October 2010, Marion True’s case drew to a close, dismissed from the Italian courts due to the expiration of the statue of limitations. Less than six months later, in March 2011, the Getty sent 46 antiquities to Italy, including the so-called “Aphrodite” sculpture which now belongs to Aidone, Sicily. (For the Italian government, the return of the antiquities seemed equal to an admission of guilt for collecting illicit antiquities.)

In March 2011, President Gian Mario Spacca of the Marche Region in visited to offer a deal to “share” the Victorious Youth through extended loans.  "We are not here to declare war on the Getty," Spacca said in a statement to The LA Times. "We are here to resolve the dispute in a way that will benefit the museum, the people of , and most important, art lovers around the world."


Italy is still waiting for the Getty's response.

*The Victorious Youth is known in Greek as an autostephanoumenos, a generic athlete acknowledging victory by pointing to a laurel wreath, which has, alas, disappeared.