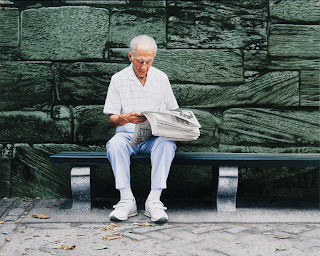 Some critics see Edward Hopper's urban loneliness, some critics see Johann Vermeer's geometry.  I see none of that, really.  Max Ferguson's Post-Modernist Realism is warmer than Hopper's and more complex than Vermeer's.  That complexity doesn't stop with his formal considerations.  Ferguson takes on the complexity of a  relationship.  In this case, the Father and Son Relationship, which has so many dimensions.  From hero worship to disillusionment, from constant camaraderie to unspoken boundaries, fathers and sons slog through different stages of their development together and, hopefully, remain friends. 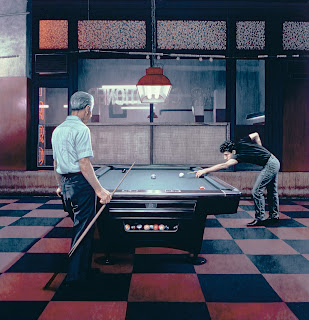 BNY: Which paintings are inventions of your father in circumstances that
he would not have participated in during his lifetime?

MF: Buying The Forward, selling tickets at a movie theater. Playing pool with me.

BNY:  How much of his true personality can we glean from your paintings?

MF: Some, but not all aspects. He was very physically active, and extremely funny, which I don't believe come across in the paintings. (Related. I have often thought that if someone had never met me, and just knew my paintings, they would have a radically inaccurate idea of me. Humorless? Constantly making jokes. A loner?   Married with three children. Tranquil? A ball of anxiety and nervous ticks.  Patient? Could not be less so...)

BNY: Do you feel that there is a bit of yourself infused in the person
you create on the canvas in the guise of your father?

MF: Absolutely. He and I are to some degree inseparable. 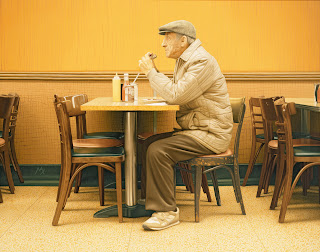 "I began working on this painting of him in Katz's Delicatessen a short time after his death in 2005. The whole time I was working on it, I kept asking myself if this was my way of dealing with his death, or not dealing with it, by trying to keep him alive via this painting.  To stop painting him is to acknowledge his death.   To accept his mortality, is to accept mine . . . " (Max Ferguson catalogue, p. 10)

BNY: Do you bring a deliberate concept to the characterization of your father?

MF: In one sense he is Everyman. In another sense he is very specifically my father.
People keep telling me they see their father in him, so is also a universal "father figure."
The more personal you get, the more universal you become.

BNY:  You spoke about a kind of Proustian desire to preserve a moment in
time as you recognize how quickly modern life changes our immediate
environment.  When did this desire first occur to you?
MF: I have always been hyper aware of the brevity and transience of life.
Never being one to quite accept the idea of death, I have long sought to hold back the hands of time. I tend to resist change of any kind.  It is hard to pinpoint any moment, but this idea of freezing time and resisting change has always been reflected in my work; but not initially as a conscious element, or catalyst. 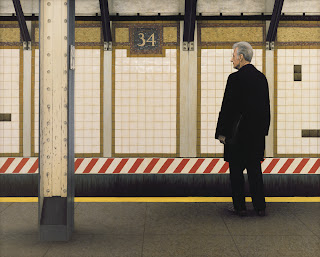 My Father in the Subway III, 1984
oil on panel, 22 1/2 x 28 1/2 inches
Collection of the artist
"I made the photographic studies for this in July, but my father was generous enough to wear a winter coat." (Max Ferguson catalogue, p. 18

MF: I think of them as genre paintings, but in a broader sense they are portraits.

BNY:  Do you believe that the culture of the 1950s and 1960s plays a role
in your formation as an artist?  Specifically, did the idealization of
the father in late 1950s and early 1960s television and movies: Father
Knows Best, The Donna Reed Show, Fury, Disney movies, etc. influence
your desire to idealize your father in your own art?  Have you ever considered this
question before?

MF: I have never thought about that, but I suppose one's environment (especially as a child) cannot help but influence one's perception and concepts of the world.
[I recently found something I had written when I was 8 that said in effect:
"When I grow up I want to get a job so I can support my family."] I was literally a child of the 60's, and certainly watched a good deal of television of that ilk so I am sure the influence was there. I am certainly prone towards idealizing and romanticizing. Certainly it is difficult for me to escape certain imposed gender stereotypes. For example: I might have found it difficult to paint women playing pool, or a man lighting Sabbath candles (even though when single I did just that). 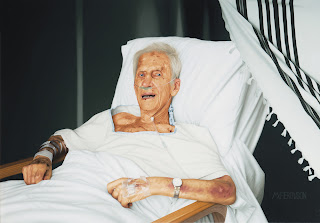 "I often asked myself if my father would have approved of me painting this.  The answer is no.  Was I being disrespectful of him? I am not sure, probably yes.  Still, I felt not so much that I wanted to paint this, but had to." (Max Ferguson catalogue, p. 35)


BNY:  You painted your father when he was alive and you continue to paint your father since he passed away in 2005 at the age of 92, perhaps to keep him alive in your daily life. How does it feel to bring your father to life on the canvas?

MF: As assiduously as I seek out realism in my paintings, I avoid it in my daily life.
No more concrete manifestation of reality than death. Mortality has never been my favorite thing. To continue to paint my father is both my way of dealing with his death and denying it simultaneously. To bestow on him a degree of immortality is my vain attempt to do the same for me. It is both resurrecting him (playing G-d in a sense), but also refusing to accept his death. It is comforting for me to still have him with me; if only 2 dimensionally.